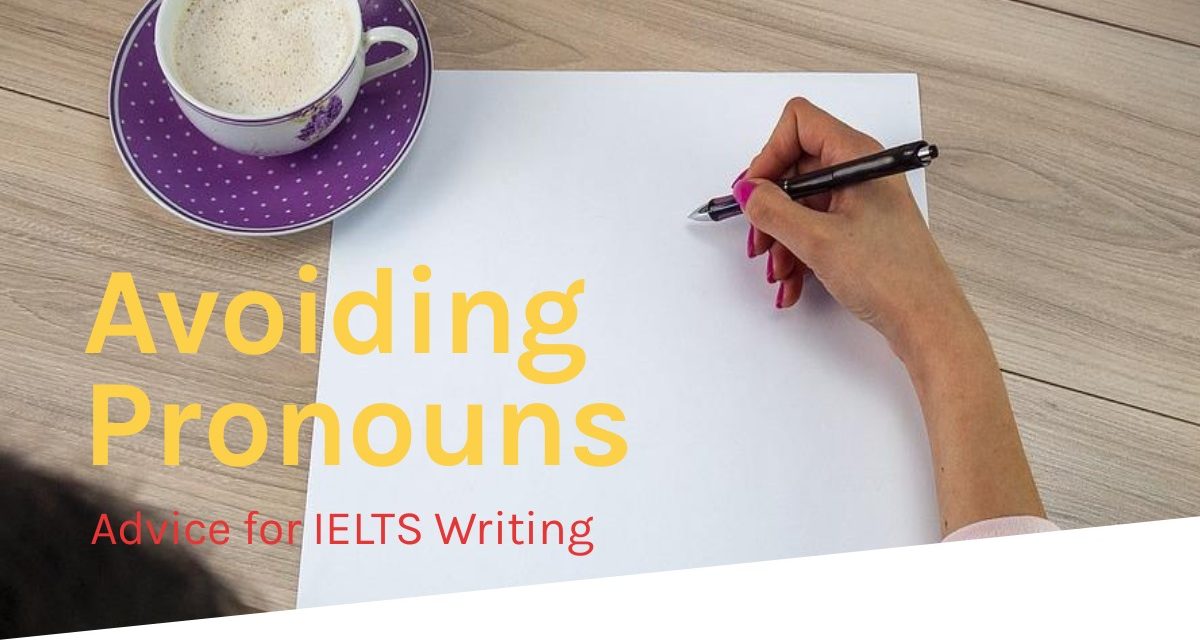 Today I want to talk about something that is perhaps a little controversial within the IELTS community. I am going to tell you how to avoid personal pronouns, and yet many people might argue that this is unnecessary. To me, however, it is somewhat important.

If you are interested in improving your writing by increasing the level of formality, then continue reading and find out why you should avoid personal pronouns and how to do effectively.

Should you use personal pronouns in IELTS writing?

Well, this is the big question that needs to be answered first and foremost. For task one of the academic IELTS test, the answer is clear: NO. You should absolutely not use personal pronouns in your report. This is because you are required to describe the data in front of you. You may not add any extra information or any sort of opinion. You cannot, for example, say:

I think that prices rose during the five year period because…

This is not part of the task that you are given, and so there is no situation wherein you could really use a personal pronoun.

For the general exam, it is a different matter. You can certainly use personal pronouns in your letter. Even for formal letters to bosses and councils, you can definitely say, “I” or “you.”

However, the contentious part is whether you should use these words for IELTs writing task two. To this, I say, YES you can use then, but NO you shouldn’t.

For a start, using personal pronouns in an essay lowers the level of formality, and you are trying to write a formal essay. When you say, “I think that…” it is not grammatically incorrect, nor is it necessarily inappropriate, but you could certainly have stated this in another way. That other way would probably be more formal.

In addition, using alternate forms of expressing common ideas that would normally require a personal pronoun shows a degree of flexibility and allows you to use more advanced grammatical constructions. As such, this can help your score increase for Grammatical Range and Accuracy.

What is wrong with using personal pronouns in an essay?

To answer this question, we have to look at different types of essay. For some types of essay, there is simply no good reason to use a personal pronoun. Let’s take two IELTS task two essay questions as exams:

Shopping is becoming more and more popular as a leisure activity. However, some people feel that this has both positive and negative effects.

Why is shopping so popular?

What effects does its increase in popularity have on individuals and on society?

Many businesses think that the new employees who have just graduated from schools lack interpersonal skills, such as working with colleagues as a team.

What has caused this and what are the solutions to this problem?

**NOTE: You can see a long list of IELTS writing questions here.

In these questions, there is no call for a personal opinion. You could probably say that “I think shopping is so popular because…” but this would definitely signal to the examiner that it was a low-level essay. You have used a quite basic phrase and an informal tone. Although you would not necessarily get a very low score, it would definitely prevent you from getting a very high one.

On the other hand, there are some essay questions that really do require your opinion:

Some people say that the increasing business and cultural contact between countries brings many positive effects. Others say that it causes the loss of national identities.

Discuss both sides and give your own opinion.

With a fast pace of modern life more and more people are turning towards fast food for their main meals.

Do you think the advantages outweigh the disadvantages?

In your answer to these questions, you would be completely right to say “I think that…” Clearly, your opinion is required in order to fulfil the requirements of Task Achievement.

The benefits of avoiding personal pronouns

Even when your opinion is required, there are some definite benefits to not using the word “I.” This may seem completely at odds with the question, but it is actually rather sensible. Let’s look at the last question from above. (The one about fast food.)

Which of these two introductory paragraphs is better?

Although it is only a small change, #1 is better than #2. This is because I have used a more formal tone in #1, with a slightly more advanced grammatical construction.

Let’s see how the two essays would differ in terms of their conclusions:

Again, the difference is very small, but it is still worth noting. In the second conclusion, I have inserted the personal pronoun “I”. There is nothing wrong with this, but it does reduce the level of formality slightly. In the first conclusion, “I” is implied without being stated. I have presented my views clearly without resorting to basic language like “I believe that…”

**NOTE: The pronoun “you” should never be used in an IELTS task two essay. This is because it is considered much more informal than others, particularly in writing. You are not meant to address the reader of an essay, and therefore “you” could only be mentioned as an alternate meaning to “one.” This is considered a feature of informal language, and is far more informal than “I” or any other pronoun.

How to avoid personal pronouns

If you have read the above sections and think that you would like to remove the personal pronouns from your IELTS writing, then read on. I will show you how to do it.

First of all, you should consider where in your essay a personal pronoun is likely to appear. In most strong essays, those will be the introduction and conclusion. There is really not much call for “I” in the body paragraphs, although you may present an example that includes “he” or “she,” and this is acceptable. It is hard to avoid that sort of pronoun use, and doing so would probably have no real gain.

Therefore, you should pay attention to your language and structures for introductory and concluding paragraphs.

I find that most people use “I” in the final sentence of their introduction. This is because you should generally state your opinion and/or the purpose of your essay in this sentence. While it is reasonable to use that sort of language, as I explained above, you can use better language to increase the complexity and formality of your essay.

Let’s look at another example to see how the language could be changed to remove the personal pronoun:

In the past, musicians and artists were among the most valued people in society, and yet today it appears that they are less important than scientists and experts. I think that this statement is true.

Here, we have the structure “I think that…” This could also be rephrased in a number of ways: “I believe that…” or “I agree with this statement.” However, we can use one simple phrase to improve the sentence:

In the past, musicians and artists were among the most valued people in society, and yet today it appears that they are less important than scientists and experts. This essay will argue that this statement is true.

I run an essay correction service and every day I need to write several IELTS essays for my clients. One of the most common phrases that I use is:

There are some variants, of course, that depend on the question:

You need to be careful which of these you employ relating to the question that is given. However, you can clearly see that they all use the phrase “this essay will…”

The reason for this is that I have swapped “I” for “this essay.” I have removed myself and in my place there is just the essay and its purpose. This is a feature of high-level writing, particularly in academic circles. When it is inappropriate to say “I,” you can replace yourself with the essay and act as though the essay is autonomous to some extent.

Let’s now look at an example of a conclusion and see how we can use the same rule from above to improve it:

In conclusion, most companies pay some of their senior staff very high salaries and, although many people think this is unfair, I believe that it is necessary for a company to ensure that its best and brightest rise to the highest levels.

Once again, I am going to remove “I” and replace it with “this essay.” However, remember this one important rule:

Your essay is not a real person and so it cannot believe something.

You cannot say “this essay believes…” or “this essay thinks…” Instead, you need to find a verb that can be performed by something that is not alive. An essay can do the following:

Therefore, I am going to change the above conclusion to:

In conclusion, most companies pay some of their senior staff very high salaries and, although many people think this is unfair, this essay has argued that it is necessary for a company to ensure that its best and brightest rise to the highest levels.

Note that the tense of the verb reflects the fact that this is part of a conclusion now. When we write in the introduction and conclusion, we need different language:

One final possibility for dropping a personal pronoun is simply to omit it and not replace it with anything. In some cases, you can present a fact and it is implied as your opinion. This can only be done after you have made it clear that this fact is presented on the basis of your arguments, and it is therefore only really appropriate in a conclusion.

In conclusion, I feel that the modern trend towards inactivity is worrying because of the host of health problems which stem from it. I believe that solving this problem will be a major challenge, but I think that there are some things that can be done.

In this conclusion, there are too many instances of “I … that…” and it sounds repetitive, in addition to the fact that we should generally avoid “I.” As such, we could simply remove these personal pronouns to show that these statements are facts based upon the ideas expressed in our body paragraphs:

In conclusion, the modern trend towards inactivity is worrying because of the host of health problems which stem from it. Solving this problem will be a major challenge, but there are some things that can be done.

If you would like me to assess your writing and help you improve it, check out my writing correction service. This will give you the best possible chance of IELTS success.